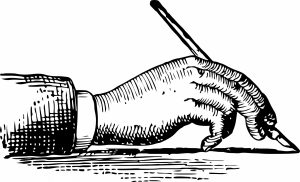 When you usually hear the term “NaNoWriMo” it’s equated with a marathon-sprint of writing that takes place in the month of November. Anyone in the world can sign up to the challenge of writing a 50,000 word book in a single month (this comes out to just under 2k words a day), and thousands—perhaps millions—of people finally have the excuse they need to get that book in them out onto paper.

And for the summer-loving folks, every July a spin-off event with the same rules called Camp NaNoWriMo takes the writing world by storm again, causing many authors and aspiring authors alike to ask the question, “Should I participate?”

This event has plenty of supporters, and some of those who participate go on to have their original NaNoWriMo project published as an actual book (think, The Night Circus by Erin Morgenstern, which sat on the NYT bestsellers list for 7 weeks). But while many are quick to shout NaNoWriMo’s praise, there are a fair chunk of individuals (and authors) who despise the event as well.

Why, you might wonder, would any event that encourages people to write—and write a lot—be a bad thing?

Now, I’m not a participant of the NaNoWriMo events, and probably never will be (2k words a day sounds more like a nightmare to me than an exciting challenge). But I’m not a critic of the process either. Those who oppose it typically use the argument that writing fast equals writing crap—but I don’t think anyone who completes their 50,000 word first draft in 30 days would disagree with that when they look back over it to edit.

What those critics forget is just that—in order for a first draft to become a book, it will go through many, many rounds of edits.

Some authors prefer to take their time when writing their story. They prefer writing in slow, deliberate chunks to let the magic of their made-up world really soak into them. But other authors get bored if their first draft takes too long to put down on paper, needing a challenge like NaNoWriMo to get them out of their “perfection” brain and just write the story. In either case, editing will be needed.

Writing a book is a long process. One that takes longer than 30 days, no matter how you look at it. But if you’re participating in Camp NaNoWriMo this month, you’re taking a giant leap toward getting that finished manuscript in your hands, which is something to be celebrated!

Are you participating in Camp NaNoWriMo this month? Let me know what you’re working on in the comments!