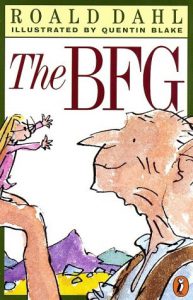 I just saw Roald Dahl and Steven Spielberg’s movie, The BFG. (Big Friendly Giant to all you new guys.) It’s totally cool. For those who don’t know, it’s about this eight-year-old girl Sophie who gets snatched away from her orphanage bedroom by an awfully tall giant and whisked away to the giant’s cave way off in Giant Country.

I won’t tell you everything that happens after that. There’s the problem of the nine other bad giants that eat kids. (Our nice giant is a vegan.) And the trip to Buckingham Palace to warn the queen that the bad giants are about to invade. But that’s just plot stuff. The charm and essence of the thing is the BFG’s job. He captures dreams—in a butterfly net, no less—and stores them in jars and sneaks into town late at night and blows them into the bedrooms of sleeping children. With his long, skinny trumpet.

A great leitmotif are the Frobscottle and Whizzpoppers. Frobscottle is a bubbly green drink where the bubbles float down instead of up. So instead of burping, it has you making great green Whizzpoppers out of your down part. They lift you off your feet.

Sophie is a proper British girl and is put off by this, but she comes around to it in the end. As it were. Even the queen and her Corgis try Frobscottle and the results are diverting.

You’ve got to love Dahl’s wackiness. He’s the king of wacky. But I think my favorite thing of his is the way he sticks it to the grownups with this naughty stuff. He often said the key to his success was conspiring with children against adults. (I have found with my own children’s stories that the more I can slip past the naughty police, the better. Up to a point, of course.)

About the movie itself: It tracks the book straight down the line (except for changes that the genre demands). The visuals are great. (Hey, this is Spielberg, right?) The makeup is magical. (Think Harry Potter.)

And the acting: They say Mark Rylance (the giant) is the greatest stage actor of his generation. You may have seen him in Bridge of Spies and the TV series Wolf Hall. (A KGB colonel and Thomas Cromwell, respectively.) He deals with the BFG role wonderfully, and manages to get Dahl’s goofy words out cleanly. E.g., ughbwelch, probsposterous, quogwinkles. (I know, this is part of any good actor’s job, but YOU get the book and try rattling off some of these in the middle of a sentence!)

I put Ruby Barnhill (Sophie) at the top, though. She is eight years old in the story and looks it in the movie. Oh, maybe ten—but her front teeth aren’t even in straight yet. She handles the part of a proper little English girl like a twenty-year-old pro. Her delivery and enunciation are right there, and she comes off as a real, live kid. Like she’s done this for ten years. I can’t say she’s better than Rylance—she’s not—and anyway that’s apples and oranges. But I do put her performance at #1. For the true and ample reason that it’s easier to play a grotesque than a real, natural, sure-enough individual person. You can go look it up!