Fathers, You Don’t Play a Role in Your Child’s Life: You Play Many 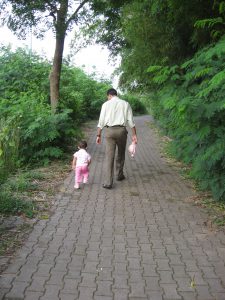 For much of our history, the roles of a father and mother were clearly defined. The father earns income, provides stability, is the protector of the home and people in it. The mother is the caretaker, the loving parent with a home to run. But those roles have been changing for quite a few years now, and we are now at a pivotal point where both fathers and mothers can choose the kind of roles they feel best suits them as parents, and fathers can be much more involved in the raising of their children than they were expected to be in years passed.

In fact, studies have revealed they should be much more involved with their children. A review of multiple studies found that kids who grew up spending time with their fathers were less likely to have behavioral and psychological problems. They were also more likely to be independent, intelligent and have improved social awareness.

So fathers, being in your child’s life as more than a provider and protector, but also as a loving parent can actually improve their life all around! An LA Times article also concluded that “researchers found that the chances of teen pregnancy and other early sexual experiences were lower for daughters who spent more quality time with their dads.” Dads, I think we can all agree that is good news.

This is all good news, actually, considering the fact that more than 200,000 homes in the US have stay-at-home dads, and there are 1.9 million single fathers in the country. Often, it is a concern that a father won’t be able to fulfill a mother’s role, but these studies show that there really is no such thing as a “role” that either parent plays, and children will benefit from having the role filled, regardless of whether a mother or father is filling it.

So what can we do as parents? We can figure out our strengths. We can spend time playing and loving our children as they grow up. We can fill every role there is, and we can fill them whether or not our partner already is filling them. Both partners can be providers. Both can be caretakers.

Be open-minded toward your approach to parenting, and your child will reap the benefits.