There are two main elements to a story: plot and character. There is debate amongst writers whether one of these aspects is more important than the other, which is why some books are plot-driven while others are character-driven, but the reality is that your book will not succeed if your characters feel inauthentic. This is where one of the most difficult aspects of storytelling comes into play—creating three-dimensional characters.

Luckily, when I started writing the Night Buddies series I had already been creating my main character Crosley for years (by making him the star in my son’s bedtime stories). I had a fully formed character who felt like a real friend in my home, and that led to an entire series being based off of him. But I couldn’t rely on Crosley alone. A book is made up of an entire cast of characters, all who need to feel as real as the others, and I knew I had a lot of work to do in order to make my other characters as three-dimensional as the character I had spent years of my life developing. Along the way, I came up with a few techniques for fleshing out the entire cast. I hope you find them helpful! 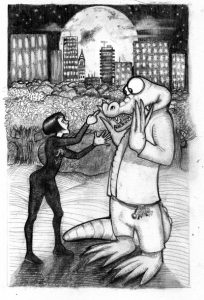 1. Always ask why. It is one thing to decide, “I’m going to write about a red crocodile,” and another to think, “What is it that makes this crocodile red? How is he unique?” You want to think of original, entertaining personality bits, but to make that character come alive, you need to know exactly why he is the way he is. Why is your character afraid of the dark? Why does he have a tattoo on his earlobe? Why does he have an insatiable hunger for pineapple cheesecakes? Knowing the why makes him relatable and easy to understand, both of which help bring him to life.

2. Base the character off someone you know. Next to Crosley, there is a boy named John who stars in the Night Buddies books who is based on my son. When you base a character off of someone you know well, you can pinpoint unique ways that person talks, unique parts of their appearance, and unique stories from their life that will come across on the page the way that person comes across to you in real life.

3. Create a character sketch. Character sketches are very important to do, but I don’t believe everyone needs to use the same template for making one. For instance, I’ve seen templates that make you consider their mother’s maiden name or their favorite time of day, but sometimes those details are irrelevant to the story. Here’s what I go by: know their backstory, know the relationships that are important to them, and know where they should be emotionally at the beginning of the story and at the end. Any other details you want to know are up to you—it can be fun to spend hours figuring out every detail of your character’s lives, but don’t get so caught up in it that you forget what’s important to your story!

4. Show, don’t tell. Your character won’t feel real if you spend pages telling the reader their likes and dislikes, how they came to be where they are, whether they have allergies in the summertime. If you make a list of things to tell the reader, the character feels like a list, not a person. Instead, show that they’re shy by how they cross their arms when in a public place. Show that they have allergies by how they sneeze when the wind starts to blow. Show that they hate broccoli by how their mouth tenses up when their mother forces them to eat all that is on their plate. What you show the reader will always be ten times more important, and feel ten times more real, than by what you tell them.

Do you tend to prefer character-driven, or plot-driven novels? Maybe a healthy dose of the two? Let me know in the comments below!