Why You Need Rituals in Your Writing Life

“The secret of your future is hidden in your daily routine.” –Mike Murdock 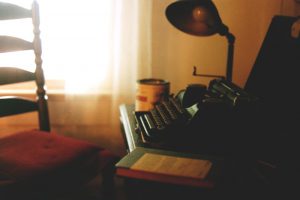 When I was a younger man, I was against forming routines. I lived spontaneously, I took each day as it came at me with no expectations, and I thought routine would be the end of my creativity. If inspiration hit in the middle of the night, I would write like a maniac from 1 a.m. to sunrise. If I didn’t have anything to write about for days at a time, then I wouldn’t dwell on it.

But then inspiration was coming to me less and less frequently. I was writing once a week, maybe, then once a month, then not at all. I had no pattern to my creative life, and I was becoming weaker as a writer and as a thinker. I didn’t have ideas for stories, I didn’t have the tools to write them down when they did come, and when I embarked on longer projects, they never got finished.

It was about this time that I heard some career-changing advice: you are only as strong as the rituals you establish for yourself.

As I looked into it, I realized that many, if not most, of the biggest names in the literary world had writing rituals. Sarah Dessen writes from 3 p.m. to 5 p.m. every single day, whether inspiration strikes or not. E.B. White always wrote in his brightly lit living room, and refused to listen to music during his writing hours. Haruki Murakami wakes up at 4 a.m. every day, writes for six hours, and then spends the rest of the day exercising and reading to stay sharp and focused for this early mornings. The list goes on and on.

Forming a ritual allows you to get in the same mindset day after day, and your brain begins to realize that inspiration should hit in these specific settings. It was only when I decided to write consistently every day, at the same time each day, in the same room each day that I was able to write the Night Buddies books to completion. It doesn’t matter if your ritual means snacking on hot cheetos in the nearest coffee shop, if it means waking up before your children and your spouse so they won’t distract you, if it means you only write solidly for one hours every night—having those rituals will help you get words on the page. This is our only, singularly most important goal as writers. We have to get words on the page.

Waiting for inspiration is like waiting for a new puppy to learn to come to you on command. You can hope for it, and maybe accidentally a few times it will happen. But if you don’t train for it to happen consistently every single time when called, then eventually it will never happen at all. Train your brain to be inspired every single day, train your mind to only be able to focus on writing when it is time to write, and you’ll soon see all those stories you’ve been mulling over in your mind become real, tangible, written down stories on the page.

Do you have any writing rituals? Let me know what they are in the comments!