I started as a Harry Potter film franchise fan. From the beginning, I always saw the movies exactly one week after they came out (needed to wait for the big crowds to thin), and I couldn’t get enough. They were full of such high excitement, fine acting, Highlands scenery, and film spectacle—I was completely taken in.

And that’s when I began to read the books. 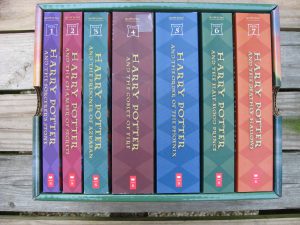 Some of my contemporaries teased me when I told them what I was doing.  “There’s nothing original in it,” they said. “Wizards, dragons,

magic wands, flying around on broomsticks—–Come on!”

I had to agree with those particular complaints, but there’s a lot more to Potter than what my contemporaries pointed out. Miss Rowling’s style is engaging, her plots are full of clever twists, and her characters are downright memorable. Not just Harry and Dumbledore and Snape and Hagrid and McGonagall, but dozens of others, like Luna and Longbottom and the Weasleys and the Malfoys, stuck with me long after I set the books aside.

My favorite elements in the stories are genuine, warranted originals, thank you very much.  I’m talking about the more incidental things—the “howlers” that parents send to their kids that yell at them before exploding. The portraits and newspapers that come alive.  The house elves.  The Sorting Hat.  And my all-time favorite, Moaning Myrtle, the melancholy ghost who lives in the toilet!  Don’t dare tell me this stuff isn’t original!

Now it’s your turn: What are your favorite elements in the Harry Potter books? Are you as big a fan as I am?