It goes without saying that you need to be very familiar with any dialect to capture it on paper. You need to be able to speak it yourself and “hear it inside your head” while writing it down. You need some innate talent, a natural “good ear,” in the same way that good musicians are “born.”

With that said, writing dialect is a balancing act. The trick is to deviate from standard orthography enough to impart the flavor and the distinctive “sound” you want, but not so much that the reading becomes difficult. And try to err on the standard side. If you write too phonetically, few will understand you (or put in the effort to try to). This is true for the King’s English (a dialect), Brooklynese, or southern Georgia. By definition, dialect departs from standard speech, but don’t overdo it. Use just enough in your writing to get by.

See the difference? To be fair, Styron was trying to make a sociological point with his almost un-readable Afro-Virginia patois, and that small sample is all that he uses. Otherwise his book would suffer.

I have to say that Bradford has struck a more proper balance. To be phonetically “true,” he could have written:

But he didn’t take it this far, and his version works much better than my corruption of it. It gives us the Louisiana flavor without stressing the reader.

Dialect is an important component in much of children’s literature, notably in Mark Twain’s Tom Sawyer.  Twain tells us he used the dialect of Hannibal, Missouri, his home town.  It reads like this:

“Hang the boy, cain’t I never learn anything? Ain’t he played me tricks enough for me t’know better? But old fools is the biggest fools there is. He pears t’know just how long he can tease before the anger starts.” (Twain, Tom Sawyer) 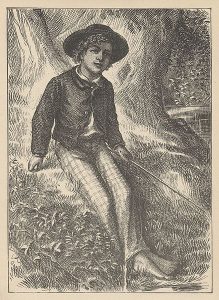 Dialect should be used gently in children’s literature, as it is above, since children are just starting to get the hang of reading grammatically correct English. However, using dialect does help them to sound out words and figure out their meanings based on that, so don’t be afraid to use dialect if you’re writing for kids!

Again, try to tread lightly whenever you use dialect.  No reader, regardless of age, wants to be alienated by the language used in your book.