Writing Essentials: Tips to Build Conflict in Your Story 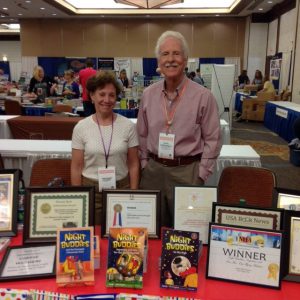 After spending the past month at the Bookmarks Book Festival and SIBA 2015 (pictured above), I’ve walked away with a whole lot of inspiration and ideas about what makes a book a success, what people love to read, and what constitutes good writing. So today I wanted to share some of my thoughts on that with you!

When I first set out to write Night Buddies and the Pineapple Cheesecake Scare, I didn’t realize how essential building conflict in the story was. You can’t just have one main conflict in mind and have that carry the entire story—the book also has to be filled with little bits of tension and little conflicts that keep the reader turning every single page. Each chapter you write should contain a major conflict, each page should be your character finding ways to resolve it. Yes, you should have one main conflict (all the pineapple cheesecakes in the pineapple cheesecake factory are disappearing) but conflict needs to always be in the front of your mind when you sit down to write.

So what are some ways to do this? Here are a few tips to help you figure out how to raise the stakes, build the tension, and create the most dynamic story possible.

Create strong values for your characters. When you know what they value and what they hold closest, it is easier to come up with conflict that will interfere with those values. Let’s say a character doesn’t drink because of an alcoholic parent, and then falls in love with a major drinker . . . conflict. Let’s say a red crocodile who loves cheesecakes more than anything now has them start disappearing . . . conflict. It can be silly or serious, but values that are being tested, internally or externally, create conflict.

Bring the family into it. Families are a huge area for conflict in a story. In Night Buddies, John’s parents question him and his sanity when he talks about his adventures—they even argue between themselves because of it. This isn’t a huge plot point in the story, but it still fills the book with extra tension and drives the story forward.

Think internally. Don’t only think of external events to build conflict, like storms or people, but think about your character’s feelings. Do they feel disappointed in themselves or their life, do they hate their siblings, do they suffer from depression? Emotional conflict is just as, if not more, essential to a dynamic story.

Keep bringing back the enemy. Your story should have an antagonist—think the Joker, or in my story’s case, a band of evil iguanas. The more they show up, the more conflict your protagonist is going to have to face. Not only do they have to deal with the trouble the enemy causes, but they also have to deal with the emotional conflict of either sinking to their enemy’s level, or taking the high road and maintaining their moral as the good character.

So there you have it! There are probably a hundred ways to build conflict in your story, so just always remember that when things seem to be going too well for your character, it’s your job to knock him off his high horse!

What are some writing essentials you’ve discovered? Let me know in the comments below!