Why You Should Give Your Child a Journal 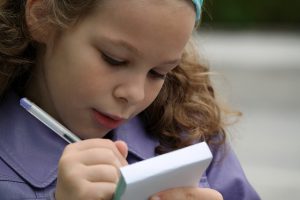 As parents, so often we want to find gifts for our children that will mean the world to them. Whether it’s the new game they’ve been dying to play, a Lego set they’ve had their eye on for months, or a football to throw around the neighborhood with friends, when birthdays and Christmas roll around it is our job as parents to give them something they’ll always remember. But I think that sometimes it is also instrumental to gift them with something that they’ll not only enjoy, but that will boost their confidence and expand their knowledge. That’s why I gave my son so many books when he was a kid—I wanted him to know the enjoyment of losing himself in a world that wasn’t his own and teach him that reading isn’t an activity restricted to school hours. But then I got another idea—I was going to give him a journal of his own. Here’s why that was the best decision I could have made.

A journal allows children to spend time with their thoughts. Kids are usually much less introspective than adults, and that is often a good thing. It allows them to live in the world and follow their instincts. But I think it is also important that kids try to understand why they feel certain ways, and writing in a journal gives them that power. My son could write down what happened on one of his bad days, and realize that it was bad because he felt disappointment, or anger, or sadness. He had a personal space all his own to explore his thoughts, and in doing so, to explore the world and his position in it.

A journal allows children to explore their creativity. I asked John to write down stories in his journal, to live in his imagination for a few pages each day, and to not second-guess what he was writing down. Having the opportunity to make up stories any way that he wanted, knowing he wouldn’t be judged for whatever he wrote, was instrumental in growing his creative side and making him dream bigger than a lot of other kids his age.

A journal improves children’s literacy skills. Sitting down to write a few days a week, every week, gradually helped my son become a better reader and writer. He was using skills learned in the classroom in his own way at home in the journal, and his Language Arts grades in school improved astronomically as a result. Kids don’t realize how much they’re learning by writing, to them it should become as much a part of their home life as watching TV, but every word they put down helps them become better students.

A journal will preserve memories most children lose as they grow up. It’s fun to go back and read journal entries you wrote from years past, but it’s even better to read back through childhood memories. I hardly remember what it was like to be in elementary school, but if I had kept a journal I could travel back into my head at that time and see what I thought about the girl who sat next to me in class, and about my parents, and about sitting with the nerds at lunch. These are priceless memories that your child has the opportunity to remember forever.

Did you keep a journal as a child? Would you pass that tradition down to your children? Let me know in the comments below!