Best Children’s Books To Take On Your Summer Camping Trip!

One of my favorite activities to do with my son over the summer is go camping! Whether it’s you and your family out in nature, or you’re sending your kids away for their first summer camp experiences, the perfect companion will always be a great book.

Here are my top children’s books all about camping! 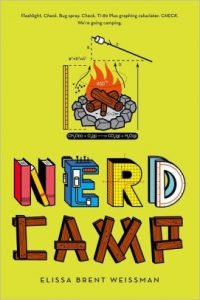 “Ten-year-old Gabe has just been accepted to the Summer Center for Gifted Enrichment. That means he’ll be spending six weeks at sleepaway camp, writing poetry and perfecting logic proofs. S.C.G.E. has been a summer home to some legendary middle-school smarty-pants (and future Jeopardy!contestants), but it has a reputation for being, well, a Nerd Camp. S.C.G.E = Smart Camp for Geeks and Eggheads.

But is Gabe really a geek? He’s never thought about it much—but that was before he met Zack, his hip, LA-cool, soon-to-be stepbrother. Gabe worries that Zack will see him only as a nerd, until a wild summer at camp—complete with a midnight canoe ride to ‘Dead Man’s Island’—helps Gabe realize that he and Zack have the foundations for a real friendship.”

Letters from Camp by Kate Klise 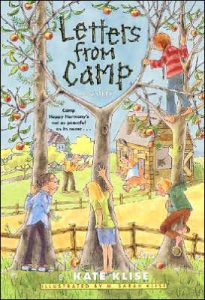 “The brother-sister pairs who arrive for the summer at Camp Happy Harmony are almost too busy fighting with each other to notice how strange the camp really is. Not only are the campers forced to wear bizarre uniforms, eat gross food, and do chores all day, but the members of the family that runs the camp fight constantly—with each other. Are the campers in danger? Or—in spite of sibling wars—do they need to stick together to solve the mystery humming under the surface of Camp Happy Harmony?” 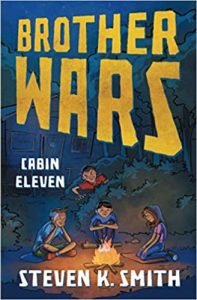 “Ten-year-old Harry can’t wait for a week of summer camp in the mountains at Camp Awonjahela. Unfortunately, his older brother Randy is coming too. If that weren’t bad enough, his Cabin Eleven is cursed. Or at least that’s the legend. Even worse, a girl named Poison Ivy won’t stop talking to him.

No one from Cabin Eleven has ever won the camp-wide competition, but that’s exactly what Harry and his friends set out to do. To break the curse, they’ll have to survive the overnight hike, win Capture the Flag, and face the mysterious figure who lives across the lake. But Randy isn’t going to make it easy. When disaster strikes, this might be one brother war too many for Harry.” 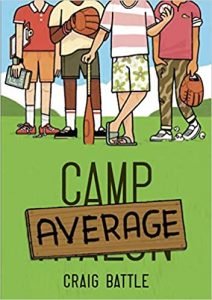 “A group of 11-year-olds arrives to spend six weeks playing sports at Camp Avalon―which they affectionately call Camp Average, because they never win at any sport. And that’s the way they like it. But this summer, new camp director Winston―who hates losing―has some hyper-competitive ideas about how to improve their performance, whether they want to or not!

Led by main character Mack and his friend Andre, the boys of Cabin 10 decide to reclaim their summer and revolt by losing spectacularly at every game they play, and especially at the big baseball tournament coming up with three nearby camps.”

What books did you take to summer camp as a kid? Let me know in the comments below!