What Traveling With My Son Taught Me About Being a Parent

[This post originally appeared on The Good Men Project] 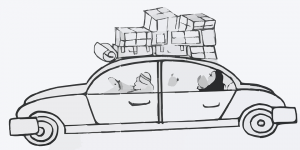 As a children’s author, I’ve been asked many times, by friends, colleagues, and readers, what is the best piece of of advice I have for parents raising their children today. To tell you the truth, I don’t always know if I have an answer for them. What we pass down to our children—morals, values, passions—is a monumental thing. So here is what I say instead:

I don’t know if this is the best piece of parenting advice out there, but if you don’t travel with your children, you’re missing out on what made up the best memories I have of my son’s childhood.

My son John is a traveler. It all took place from the time he was three, ’til he was six and his mother moved to Cleveland, ’til he went to Germany for his junior year in high school, ’til he left for the University of Edinburgh and never really came back. Has since lived in London, Germany, Russia, Spain, Belgium, and Vietnam, and has traveled to many, many other places.

What we did together as father and son was collect waterfalls. I’m sure we saw every worthwhile one in North Carolina where we lived and saw most of the warhorses in the contiguous U.S. I took him to the Canadian Rockies and the bottom half of Alaska, British Columbia, Alberta and Saskatchewan. We drove about 500,000 miles, rode planes and buses, and wore out three cars. Our red Mazda RX-7 Turbo was a real hot rod for its day and was central to our peregrinations.

Looking back, I think we missed Hawaii, Florida, Delaware, and Rhode Island. That was it. We carried baseball gloves to play catch with at the ends of days. We went through a huge number of books on tape in the cars.

This isn’t to say that our travels were all idyllic.

Once we blew a tire in Kansas in the middle of nowhere; blew it all to pieces. We put on the donut spare and limped into the nearest town right after the tire store closed, and we had to spend the night. I can tell you that Kansas is a very dull prospect (Dorothy was right.)

Another time I picked 6-year-old John up from his mother’s Cleveland house for a three-day adventure to Canada to see Niagara Falls—but it didn’t occur to me to take passports, other ID for John, or court orders. We got stopped at the border, taken into an interrogation room, and I was immediately under suspicion of being a non-custodial father trying to kidnap his son by crossing the border. The fact that I talked my way out of that one, and we still got to see the falls, is a miracle I can’t understand.

There is memory after memory; the times we got sick of each other and the times we clung closer together. Traveling with your children certainly helps them to discover the world, but it also helps you as a parent to see the world again from their perspective—exciting, big, beautiful, and just downright cool.

So what’s my advice to any of you fathers out there? Hop in the car. Don’t forget maps and a GPS. Let your son or daughter hop into the passenger seat next to you.

Go! Go somewhere, anywhere, and make the kind of memories you’ll fall asleep dreaming about when you’re a much older man.