My son John, who doubles as narrator in the Night Buddies series, is the namesake of our colorful ancestor, John Hetherington, a haberdasher of the Strand in London. Old John is my four-times great-grandfather, and may well have been the prototype for Lewis Carroll’s Mad Hatter. Surely Mr. Carroll knew about him, because they still talk about what he did, and it made it into Ripley’s Believe It or Not a half-century ago.

Briefly, what old John did was introduce the top hat to London. But I’ll let the The Times (London) take it from there.

January 16, 1797: “John Hetherington, haberdasher of the Strand, was arraigned before the Lord Mayor on a charge of breach of the peace and inciting to riot, and was required to give bonds in the sum of 500 pounds. It was in evidence that Mr. Hetherington, who is well connected, appeared on the public highway wearing upon his head what he called a silk hat (which was offered in evidence), a tall structure having a shining lustre, and calculated to frighten timid people. As a matter of fact, the officers of the Crown stated that several women fainted at the unusual sight, while children screamed, dogs yelped, and a younger son of Cordwainer Thomas, who was returning from a chandler’s shop, was thrown down by the crowd which had collected, and had his right arm broken. For these reasons the defendant was seized by the guards and taken before the Lord Mayor. In extenuation of his crime, the defendant claimed that he had not violated any law of the kingdom, but was merely exercising a right to appear in a head-dress of his own design—a right not denied to any Englishman.” 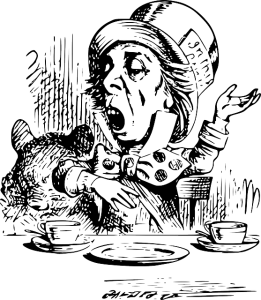 The Times wrote the following day: “Hetherington’s hat points to a significant advance in the transformation of dress. Sooner or later, everyone will accept this headwear.” (Actually it would take another 50 years.) “We believe that both the court and the police made a mistake here.”

Some kerfuffle! I am unclear about how the Lord Mayor found, but an aunt told me the 500 pounds was actually a fine, and that John was transported to Sligo, Ireland, in lieu of producing such a sum. In any case, he produced great-great-great-grandfather James there in 1807. James produced eleven children, and some of them came to the U.S.A.

My son and narrator related most of this to the Dean of Admissions at the University of London when he was thinking of matriculating there. I don’t know if it helped, because he decided to go to the University of Edinburgh instead. He did point out the Strand to me once, though, when we were crossing it on the way to somewhere else. It’s a big, wide street.