Tales of a Dog Breeder: What Being A Dog-Dad Taught Me About Fatherhood

I know there are a lot of people who claim to be dog lovers . . . but man, I’ve had a bunch of dogs! Thirteen of them since the time I could vote. Eleven Saint Bernards, with two boxers as bookends—and that’s not counting the twenty-three Saint Bernard puppies I bred and shipped out!

The time I spent as a breeder was one of the more memorable adventures of my life. My runt, Fwiddie, birthed twenty-five puppies in only two tries. I kept one who I couldn’t stand to part with (not that parting with the other twenty-four was an easy task, let me tell you), and one died after only a day in a tragic accident.

It was some job. There weren’t enough teats to begin with (only eight good ones) and I had to mark each pup with a ribbon to see that it got its share. Three feedings per day, and another at 3:00 A.M. meant that I felt as sleep-deprived as a new father! Luckily, unlike with a baby, the puppies’ feeding schedule only went on for five or six weeks—but during that time, I could never leave the house for more than a few hours. There was also the matter of shots and dew claws—I would carry twelve Saint Bernards to the vet’s office in a small box.

And then, to top it all off, I had trouble selling them. Saint Bernard puppies grow about a pound for every two pounds of food they consume, and they consume boatloads of that . . . especially when you’ve got twelve of them at once! I finally sold them off after considerable expense—I may have cleared $1000 taking care of those guys.

You’d think that might have done it for me, but there is nothing on the planet cuter than a Saint Bernard puppy. So a year or two later, my little mama produced thirteen more. It took me six months to place all of them, and by then the last ones weighed ninety pounds! As cute as they were, after that run I quit the business of breeding. But it was great in so many ways, and I’m glad I did it. You only need to lie down in the yard amongst a herd of Saint puppies to understand why!

I kept the parents for another seven years. Then came Molly (eleven-and-a-half years old), then littermates Maggie and Dudley, and now Reuben, the boxer bookend. Dudley died two years ago, so Reuben took on the role of being Maggie’s new playmate. It’s been a ride for me! 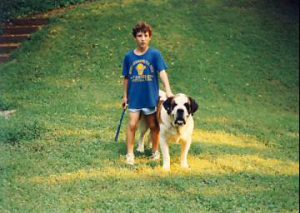 Now let me give any new dog owners some fine advice: When you are training your young dog and you tell him to do something, anything—Sit! Come here! Quit that! No!—See the business through! Even if you have a broken foot, get yourself up, hobble over, and make the dog do it. Never let him get off disobeying you. If you do, he will surely try it again and prolong the training. It may be inconvenient for you just then, but see the lesson through and it will pay off triple in the long run. You can go upside his head with a rolled-up newspaper, but do this very rarely. Do go over to him, grab him, and show him how to do what you’ve commanded. And most important, never miss a time. Whenever you do miss, it will set the training back. If you can’t back the order up right now, don’t issue it.

Housebreaking can be done several ways, so I’m told. Whatever method you use, try your best to catch him in the act. This is not at all easy to do, but just one time will impress the dog much more than marching him back and scolding him at accident scenes he’s probably already forgotten. Potty training kids is clearly different. With kids it’s all verbal, and there must be a hundred theories about it. I have a beloved anecdote about the time I was potty training my son: I was finishing a Number Two one day, and cleaning matters up, when my two-year-old John marched in, stopped and stared, and announced, “That’s good! That’s how you do it! I’m so proud of you!”

For dogs, it takes two years for them to get it all together, move past the primary school stage, and on through the baccalaureate. After that, their training should be complete, and they can get more human in subtle ways, depending on how much you interact with them. Some (certainly not all) pick up actual wisdom.

Despite all the hard work, sleepless weeks, and the pain of losing a few beloved canine friends along the way, owning and raising my dogs has been, and always will be, a passion of mine. If anybody wonders whether owning a dog is worth their time and money, all I have to say is that I wouldn’t choose to live life without the love and devotion they’ve shown me!