Making the Decision to Write a Book

I guess you could argue whether you ever “decide” to write a book—sometimes the idea is just in you and you feel obligated to write it down, or sometimes you’re just born to be someone who never walks away from a blank page. For me, writing the Night Buddies books fell somewhere in between needing to write it and deciding to write it. Let me walk you through just how it went.

First off, I was born a reader. And when my son John was born, I knew that I was going to do whatever I could to introduce him to the joys of reading too. (To see a post about how to go about getting your kid to love reading, click here.) Like I’ve mentioned in this blog before, to get John to really get into story-telling I had him come up with his own character; and that’s when Crosley, the first character for the Night Buddies series, was created.

But having a character for me and my son to talk and imagine up stories about was not something I immediately imagined would lead to me writing a book. That was something that occurred to me in slow bits, over many years. I had always been a lover of books, and I had written a few short stories here and there, but when I started thinking about Crosley being a character for the page and not just in our home, a short story just didn’t seem like enough. That’s when I started thinking about a book.

But when deciding to write a book, you can’t just think about one character. I had a good start, but a long road ahead. I had to think about another main character—and who better to star in my stories than my own son? Then I had to think more in-depth about the story and what my two characters would do together, I had to think about why Crosley was a red crocodile instead of a normal green one, I had to come up with a host of other, secondary characters. In short, I had to develop an entire world. But the more I thought about these things, the easier it started to get. And by the time I had everything thought out, the decision was already made.

I was going to write a children’s book! 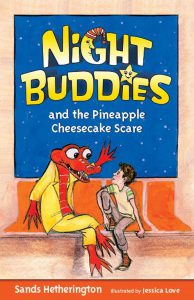 From there, of course, there were many challenges along the way. But by committing myself to this project and having the firm goal of, “I’m going to write a full-length children’s book” in my head, all those challenges were easier to overcome.

If you’re thinking you might have an idea for a book, or maybe the only idea you have is that you want to write a book, I suggest that you decide to do it. You’ll have a lot of work ahead of you, work that could take years to complete, but I can tell you this . . . turning my little idea of a crocodile named Crosley into a real, tangible book was the best decision I have ever made.