How Much TV Should Our Kids Be Watching? 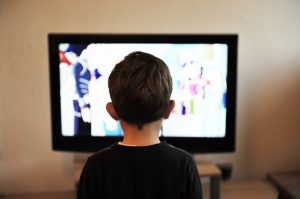 This is a question I know has come up again and again within groups of parents, education systems, and in my own life as a father trying to raise a son who knew the pleasure of reading in a world ruled by television screens. No household is without a TV, no school doesn’t have one in their classrooms, and it’s known that we can’t stop ourselves or our children from spending time in front of it, but how much is too much? Where is the line between watching a healthy, even educational, amount of television, and becoming addicted and attached to our nightly programming?

According to an article on kidshealth.org, “Most kids plug into the world of television long before they enter school. According to the Kaiser Family Foundation (KFF): two-thirds of infants and toddlers watch a screen an average of 2 hours a day. Kids under age 6watch an average of about 2 hours of screen media a day, primarily TV and videos or DVDs.”

There’s no argument that those statistics reveal that there’s a large amount of TV watching in our children’s lives these days, but rather than determine a specific “healthy” or “unhealthy” amount of TV watching, I think it is our job as parents to rule what is playing on our children’s screens. Watching two hours of a PBS show, for instance, or a Disney show that you think is teaching your child wholesome life lessons such as learning to apologize or being thankful for what they have is probably less harmful than watching two hours of mindless entertainment.

It is also important to make sure you add other activities into your child’s life than television, and the amount of time they have to watch TV will dramatically decrease the more outside activities they have to do. Whether those activities involve playing a sport, taking music lessons, spending time outdoors, hanging out with friends, or reading books, all of them will help to make sure your child is getting a range of experiences off the screen, and becoming a healthier person for it—emotionally and physically.

When it comes down to it, television is not evil. It doesn’t need to be cut out of children’s lives. And if you as a parent approach television in a responsible way, your children will too.

How much time do you and your children spend in front of the TV? Do you have any suggestions to keep it from becoming the main source of entertainment in your house? Let me know in the comments below!