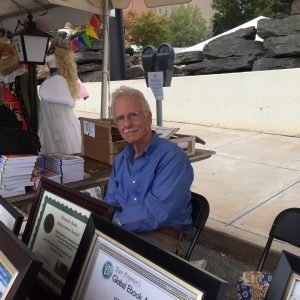 For those of you who don’t know my story of turning from a stay-at-home dad to an award-winning author, I wrote all about it at the Good Men Project! Check it out!

When my son John was born, I didn’t expect to become a stay-at-home father. I didn’t know any other dads who stayed at home to take care of their kids most of the time. I didn’t grow up with a stay-at-home father, and the concept of being a man who changed his job description from a solid 9-5 to being a single homemaker was not something I ever envisioned.

But then John came around, my wife and I soon divorced, and there I was with full-custody of a young boy who needed someone to stay home and look after him. I didn’t know it yet, but I had just entered the greatest time of my life.

As a stay-at-home father, I felt like two different people. Half of the time I spent with John I felt like a kid again. John and I did everything together, went everywhere together, and were about as inseparable as any two friends can be. During the summers we drove through forty-eight states and five Canadian provinces.  We participated in all kinds of father-son activities: little league football, basketball, and baseball, as well as boxing, golf, boating, camping . . . the sky was the limit, and I loved seeing the smile on that boy’s face when he got lost in doing something he loved.

John got his first puppy, a St. Bernard he named Henry, and we loved him so much that I began breeding St. Bernards. Most of the memories I have of John’s youth are of our adventures, his laughter, and the feeling that I was getting to experience life through a child’s eyes for a second time. But the reality of being a stay-at-home father and raising a child by myself wasn’t always idyllic.

There was the time I arrived to pick him up at the movies when he was ten, and the theatre he had gone in was dark and deserted. He was nowhere to be found. When I finally got hold of security, we turned the lights on and found him sunk down in one of the seats, asleep and quite unaware of the panic he had caused.

There was the time when his kindergarten French teacher told me John probably had a learning disability because he was having trouble in her class. Now he speaks ten languages and has an M.A. from Edinburgh University with honors in Russian and German—and wouldn’t I love to tell all this to that teacher!

There were the six years of piano lessons that were like ripping out my fingernails just to get him to practice, until we finally threw in the towel.

There was trying to be both mother and father, parent and friend, teacher and student. I had no examples to follow, no comrade to turn to on the hard days, no office to escape to when watching Sesame Street for the hundredth time made me think I might actually be going crazy.

But those hard days are nothing compared to the good stuff.

Sitting side-by-side on cross-country trips, lots of sports honors, tons of academic awards, a year in Germany and learning German, but best of all, reading stories at night before John went to sleep. In fact, being a stay-at-home father led me to my current occupation as a children’s book author.

It was essential to me that John be exposed to literature and the pleasure of reading from Day One, so I stocked up on children’s stories, from Grimm, Frank Baum, Lewis Carroll, and Roald Dahl, eventually to the likes of Dickens and Victor Hugo. But one night when he was about seven, I suggested that he ought to create his own bedtime companion to keep him company while he slept—from there, the main character of my children’s series, Night Buddies, was created.

Many nights John and I made up stories involving him and this bedtime companion, a red crocodile named Crosley, until Crosley became another member of our little family. John always held onto his love for reading, and when he grew up and started traveling the world, creating new adventures for himself, I turned my memories of the little guy I once looked after, and his goofy buddy Crosley, into a book series that I would be able to hold in my hands. Because in all honesty, being a stay-at-home father was the best job I’ve ever had—I don’t want to forget a thing about it. And given the chance, I would do it all over again.