Top 5 Reasons Crocodiles Are Even Cooler Than You Thought!

We all know that Crosley the Crocodile is pretty awesome, what with his out-of-this-world appetite for Pineapple Cheesecakes and his impeccable Black Bottom dance skills, but did you know just how cool all crocodiles can be? Here are some reasons why Crosley thinks it’s cool to be a crocodile. 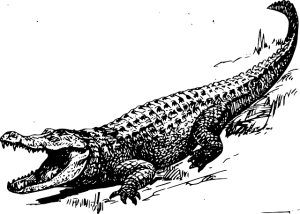 1.)    Crocodiles can be found all around the world! They live in the tropics of North and South America, Asia, Africa, and Australia. This makes them different from alligators, which are only found in parts of the United States and China.

3.)    Saltwater crocodiles are the largest species of crocodile, and is the largest reptilian predator in the world. The males can end up being twenty-two feet long, and almost 4400 pounds! On average, though, they end up being around seventeen feet long and two thousand pounds, which is still quite a bit bigger than any of us!

4.)    Crocodiles have the strongest bite of any animal in the world. Despite this, however, the muscles that open the crocodile’s jaws are not very powerful. A strong person could hold a crocodile’s mouth closed with their bare hands!

5.)    Crocodiles really do cry! Tears are normally only noticeable if the crocodile has been out of the water for a long time and the eyes begin to dry out, they don’t cry from emotion like people do.

Despite being one of the coolest species (or at least Crosley thinks so), just make sure you don’t try to befriend a crocodile in the wild. The only ones humans should be playing with are the ones that show up with a Night Buddies adventure to complete!