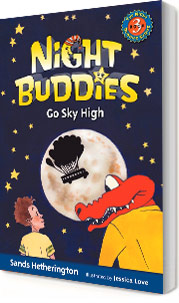 In the third book in the series, Night Buddies Go Sky High, when young John Degraffenreidt and his red crocodile buddy, Crosley, show up at the Pineapple Cheesecake Factory and find Big Foot Mae lying on the floor, staring up at her Great Star Puzzle on the ceiling, they expect something’s afoot. Crosley only wants a new supply of pineapple cheesecakes, but what Mae points to on her ceiling will start the Night Buddies on a totally new fantasy adventure.

A suspicious white dot has passed through the Corkscrew Constellation and is now moving underneath the Hound Dog Stars. Across the Borough, Crosley’s brother Crenwinkle sees the same curious speck in the sky. It looks to be a long night for sleepyhead John, but thanks to the time spreader dingus with its sleep retardant setting, he gets right into their next escapade, this time taking them all the way into the stratosphere in their newly modified personal racing blimp. 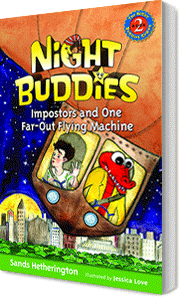 In the second book in the series, Night Buddies, Impostors, and One Far-Out Flying Machine, red crocodiles start popping up all over the city, creating confusion, committing crimes, and causing Crosley to go a little crazy at the sight of them.

For young John Degraffenreidt, a sleepless night is no reason to fret when tossing and turning in bed brings a bright red crocodile named Crosley out from under his bed. Out of bed, and into the city, John embarks on a one-of-a-kind program with his crocodile pal.

The impostors must be stopped, and Night Buddies John and Crosley are just the guys to stop them! Racing blimp stakeouts high in the sky, impostor traps organized with the help of friend, and a never ending supply of pineapple cheesecake frozen yogurt make for one totally super sleepless night. 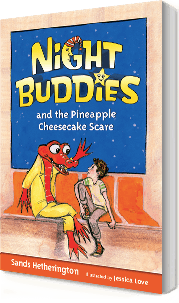 In the first book in the series, Night Buddies and The Pineapple Cheesecake Scare, when pineapple cheesecakes start disappearing from the world’s only Pineapple Cheesecake Factory across town, Crosley, a zany red crocodile, enlists the help of young John Degraffenreidt to straighten things out. In this adventure-fantasy, the unlikely pair sneaks out of John’s house by becoming invisible, thanks to the I-ain’t-here doodad Crosley uses from the bunch of whatchamacallits hanging on his belt.

On the way to the subway they get better acquainted, and John finds out the wacky reason Crosley is red, and also what happens if he gets any water on him. They get on the Night Folks Limited train and ride all the way to the Cheesecake Factory where they meet the giant manager, Big Foot Mae.

There is danger ahead, but the Night Buddies must stay with their “Program” (the Night Buddies word for Adventure) if the world’s supply of pineapple cheesecakes counts for anything. And it surely does, especially to Crosley who is totally goofy about the things and never seems to get his fill.