I’ll bet you’ve never heard of my favorite ghost story.  It’s called “Shottle Bop” by Theodore Sturgeon (Astounding Science Fiction, 1940).  The central character is a ne’er-do-well, not altogether bad guy, who is down on his luck.  He comes across a dusty little bottle shop in lower Manhattan and goes in to meet the strange little proprietor who gives him a potion in a bottle and tells him,

“It can do as much for you as you want it to.

But mind me now.  As long as you use what

it gives you for your self-improvement, you

will thrive.  Use it for self-glorification, as a

basis for boasting, or for revenge, and you

will suffer in the extreme.  Remember that, now.”

Our character goes home, drinks the potion, and is suddenly able to see into the ghost world.  And the truly remarkable thing is, he can see the ghosts but they can’t see him!  In any event, he manages to take up with a number of them and becomes rich as a “psychic consultant.”  Eventually he runs into an old enemy who calls him a phony.  He bets the guy that he can show him a spook that will scare him half to death.  They go to a haunted house where the ghost of an awful old murderer is supposed to live.  Our man’s invisibility magic wears off, though, because he has boasted and plotted revenge.  The old murderer sees him, and our friend ends up, well, quite dead.  And he has to haunt the old house forever–along with the horrible old murderer. 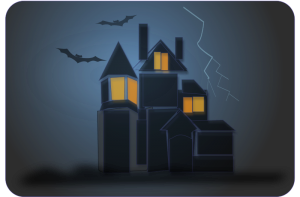 The story isn’t all that scary (except at the end), but it’s wall-to-wall supernatural phenomena, and delightfully funny and original.  It’s the finest ghost story I’m aware of.  Invisibility is by no means the only device scary stories use, but both of these examples rely on it.

I don’t do dead things or lots of scary.  My only scary characters are the iguanas, and they are as amusing as they are frightening.  In Night Buddies, Impostors, and One Far-Out Flying Machine, there is one scary scene where Crosley morphs into an iguana and hijacks John and his blimp.  The fright comes from what you thought was a friend turning into an enemy.  And there is one example of terror in the dark at the very end of the book, but let’s not give that away.  If you are looking for real ghosts or real terror, check out Sturgeon.  I promise you real results.